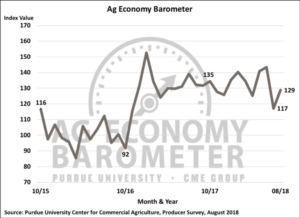 The Ag Economy Barometer rebounded in August to a reading of 129 after falling to 117 in July. Although the producer sentiment index increased by 12 points in August, producer sentiment remains well below its late spring readings of 141 in May and 143 in June. The shift in producer sentiment occurred primarily because producer’s perception of current conditions improved as the Index of Current Conditions increased to a reading of 121 following a dip to 99 in July. The Index of Future Expectations also rose in August but the increase was modest, rising to 132 just 6 points above its July reading.

The shift in producer sentiment occurred against a backdrop of USDA announcing intentions to aid farmers impacted by importing countries imposition of tariffs on a multitude of U.S. ag products. Survey responses were gathered from agricultural producers in mid-August, after USDA outlined the assistance package in general terms, but prior to USDA’s August 27th announcement providing details regarding how payments would be allocated among producers of affected commodities.

The Ag Economy Barometer rebounded in August to a reading of 129 after falling to 117 in July, but remained well below Barometer readings in May and June. The sentiment shift was primarily attributable to producers’ improved perception of current conditions. Producers were also less pessimistic about the direction of the U.S. ag economy in the year ahead in August than they were in July and this seemed to spill over into a somewhat more optimistic view about making large farm investments. Producers were still concerned that trade conflicts will lower their farm income, but scaled back their perception regarding the magnitude of the expected income reduction compared to responses received in July. Finally, producers’ opinions were evenly split regarding whether or not the administration’s $12 billion relief plan will relieve their concerns about the impact of tariffs on their farms’ income. Nearly half of respondents (47 percent) said the relief plan would either completely (4 percent) or somewhat (43 percent) relieve their concern, however 47 percent of respondents said “not at all” in response to this question.